Many of the passengers of our executive transportation service are new to the Tucson area, and they tend to have questions about the desert environment. So we here at Diamond Transportation would like to offer our guests the opportunity to get to know Tucson a little better by learning about the inhabitants of the Sonoran Desert.

When you visit Tucson for the first time you are likely to be struck by two things: The phrase, “Tucson: It’s a dry heat,” really means “Ever wonder what instant mummification feels like? Visit Tucson!” 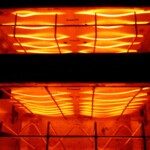 or maybe “Tucson! It’s like the inside of a toaster!”

And while you’re standing on the sidewalk, shoes melting all over the pavement and wondering how you took off from Minneapolis and landed on the warm side of Mercury, through the heat-warped desert air you’ll notice a few large, friendly locals waving at you. You’ll also notice they’re green and have far more arms than you’re accustomed to. Maybe splash some water on your face (the immediate, hissing evaporation is perfectly normal) to clear your eyes and head. Those aren’t people, or aliens, or products of your flash-fried imagination. They’re cacti and special ones at that.

The Mighty and Noble Saguaro 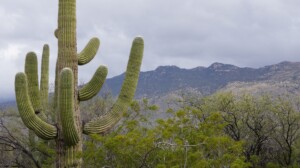 Known as the saguaro, these spiny giants are only found in the Sonoran Desert. They live up to 200 years and grow very slowly; they may only grow an inch in their first 10 years. It takes about 100 years for a saguaro to reach 15 feet, and when fully grown they can attain heights over 40 feet. The tallest ever measured was 78 feet tall.
They have anywhere from 0 to 25 arms (it’s unknown what causes this wide variance), are covered in spines that grow up to 1mm per day and can absorb so much rain water that their trunk visibly expands. They can weigh up to 2 tons when fully engorged.
We’re quite fond of our saguaro and harming one is illegal in Arizona. Cutting one down is a class four felony. And really, why would you hurt one of these guys? They look so friendly and polite. But now that you’ve gotten acquainted with the star of the Cactaceae family here in Tucson, it’s time to meet the less savory members of the clan.

The Villainous and Wicked Cholla 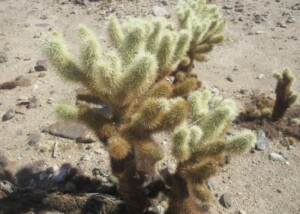 This is the cholla. It looks so fluffy and inviting, like a pile of chubby little teddy bears covered in rabbit fur! Is it a plant you can pet? Is this some kind of kitty-cactus hybrid thing? Oh, look how it seems to tremble and jump out at you as you pass. I think it wants a hug!
Obviously, that’s a lie. It’s a cactus, a mean one, and it wants to murder you. That fluff is a blanket of blood-thirsty spines and that trembling is what happens when the cholla is stirred by the wind or the slightest brush and signals the end of your pleasant day.
Cholla are six to fifteen feet of loosely connected branches covered in spines. They are referred to as the “Jumping Cholla” due to the ease with which these branches detach and catch on anything that passes by. The branches are covered in ½-inch to 1-inch long hollow spines that will curve when they contact moisture, essentially turning them into fish hooks. So yeah, maybe don’t actually pet them.

The Tasty but Kind of Shady Nopal 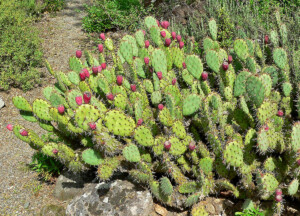 If the saguaro is the friendly one, and the cholla is the jerk, then the nopal is the fun one that gets you into trouble. Also called the prickly pear due to its fruit, the nopal is made of flat, spine-covered paddles. The fruit of this cactus is bright red and is a local favorite in many recipes. It is also covered in faint, feathery spines that aren’t always apparent to the uninitiated or inebriated. Oh yeah, did I mention these can get you drunk?
Prickly pear fruit is known for fermenting while still on the cactus. It’s fairly obvious when it happens, as you exudes a definite aroma, so there’s no real need to worry about accidentally consuming fermented fruit. Also, it would likely take more than just a couple pears for a fully grown human to feel the effects, but for the local bird population, these fruits are like little thorny wine kegs. 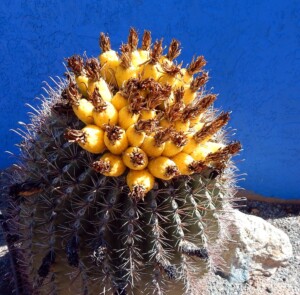 The last cactus on our list is the unassuming barrel cactus. They’re generally short, stubby, and round although some can reach heights exceeding nine feet. They begin blooming in late April and produce a bright yellow, lemony-tasting fruit that is covered in spines and high in oxalic acid, which can cause diarrhea and in high enough concentrations, kidney failure. There’s not really enough in a few fruits to cause any problems, but don’t eat this stuff regularly.
Certain species of barrel cactus are less round and more cigar-shaped, and these can develop a pronounced southward lean as they increase in height and age. This is caused by slower growth of the southern-facing side of the cactus, which in turn reduces the surface area that contacts the midday sun, mitigating sun damage and water loss. Even the cacti in Arizona are trying to escape the heat.

Now that we’ve talked about the cacti (cactuses is actually correct as well, so go with whichever you prefer), let’s talk about the trees here. I’m sure you’re thinking, “Now they aren’t covered in spines too, right?”

Of course they aren’t. Don’t be silly.